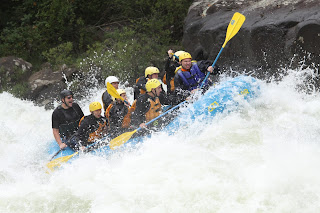 Next was traveling in Ithaca, NY for a career fair to help recruit students at Cornell University.  It was a great two day experience as I got to meet a lot of students with various backgrounds.  Some of the students definitely had a prodigious amount of experiences and awards.  After a two day stay there I was flying back to my home in Florida.  When I came back to Florida I had to get ready to move my apartment.  After moving all the stuff I could over 3 or 4 days, I was back to traveling for work in Canada.  Here is where everything got really crazy.  I am going to allow you to skip the details and you can jump to the next paragraph.  On Monday I noticed black stool.  Then on Tuesday two more times including dizziness, weakness, fatigue, and blurred vision.  I decided to check in to the hospital to see what’s going on.  Because I was a foreigner, I could not see a doctor until I paid a fee of $575.  Since it was a small town, the hospital had no ATM or credit card machine.  Plus the doctor wasn’t going to be until another hour and a half.  After going to the ATM and getting the maximum amount I have, which was $480, I was able to see the doctor who admitted me and gave me some IV and an antacid drug.  I was doing pretty well for most of the day and the next morning.  They were going to allow me to check out and go back home when another dizziness session hit and I became unresponsive.  The next thing I saw was 7 nurses at my bed including the doctor; he was profusely yelling at someone to “squeeze the bag squeeze the bag”.  I was feeling much better and stable after the fast injection of IV.  They also gave me two bags of blood on my way to a major hospital as they were only a regional hospital with limited expertise.  I arrived at the Regina hospital in stable condition.  They scoped me and didn’t find any bleeding ulcers.  They did see one ulcer, but it was not bleeding.  They did a second scope the next day and still did not find anything. I am now safely back in the states where they will treat me even if I didn't have any cash, which I guess is an improvement at least.
Posted by E, like the letter at 8:18 PM